Punching shear checks are vital when using concrete flat plates due to the brittle nature of this failure mode.  Punching shear failure can be avoided by increasing the slab depth or incorporating other shear enhancement techniques, but are these enhancements necessary or does the flat plate have enough capacity on its own?

Michael walked through an example for determining the punching shear capacity of a flat slab at an edge column interface.  The shear and moments applied to this column have already been determined by using the Equivalent Frame Method.  Since this is an edge column, the critical punching shear stress will be a combination of the direct shear stress from each of the contributing column strips as well as the shear resulting from the applied moments in each direction.  The result of these combined forces will be determined at each corner of the critical section. 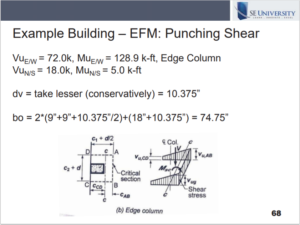 For the 18 inch square column, the critical section, bo equals 74.75 inches and the depth, dv is taken conservatively as 10.375 inches for the 12.5 inch slab.  Michael determines the distance to the centroid, X to be 7.193 inches and can then calculate the moments of inertia in both directions. 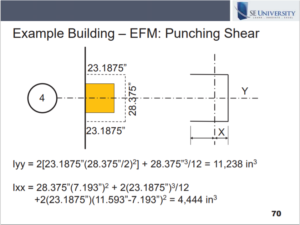 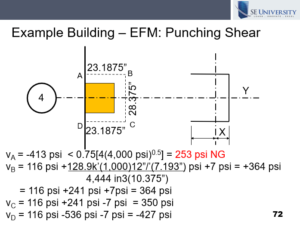 The total applied shear stress exceeds the allowable shear capacity as determined by Chapter 22 of ACI 318, thus the slab fails the punching shear check for this edge column for the applied loads.  Either the total slab depth would need to be increased, or the engineer could explore the use of stud rails, shear heads or drop panels to avoid a sudden punching shear failure in this building.

There are no comments yet, but you can be the first