April is just around the corner, and that might be the best time to set aside some time to clean out your digital inboxes.  Not only do most of us have hundreds of work emails that need to be sorted or responded to, but add in personal email accounts and the task seems overwhelming.  Here are some quick tips for gaining control of your overflowing inbox:

SEU Speaker Inspires Organization of the Month: Bridges to Prosperity

According to their website, “Bridges to Prosperity envisions a world where poverty caused by rural isolation no longer exists. Our programs provide access to healthcare, education and markets by teaching communities how to build footbridges over impassable rivers, in partnership with organizations and professionals. We prove the value of our work through a commitment to the community and its bridge that lasts long after the opening celebration.”

Thank you, Susan, for helping structural engineers with your SE University session, and for your designation of Bridges to Prosperity as our SEU Speaker Inspires Organization of the Month!

Have a Knack for Networking

The term ‘networking’ can elicit varying reactions among engineers.  You may think of networking opportunities being available through local chapters of structural or civil engineering societies, technical conferences, or building construction associations. Some engineers react with excitement at the thought of networking at these events, while others may cringe at the thought.  Some may even consider networking a complete waste of time.  However, what if we challenge ourselves to think about networking in a different light?

In an article in Forbes Magazine, Andrew Vest outlines How to Network the Right Way, and includes several tips to be successful at your next networking opportunity.  His advice on the subject suggests the key is to consider networking as an opportunity to help others rather than for self-gain.

Often times, engineers will only branch out to network when they are in need of something, such as developing new clients for the firm they work for, looking for a new job, or growing their own business.  What if instead, you challenged yourself to get more involved and offer your talents and knowledge to help benefit the group?

One key idea presented in the article is that the right way to approach networking is to start before you need anything.  Begin by changing your motives, and aim to enjoy people that share your same passions.  Mr. Vest comments that the most successful networkers learn to listen and figure out who they can connect with others to be a benefit to the group, without striving for personal gain. Entering a networking opportunity with the goal of learning more about others and their businesses so that you might be able to help them can also lead to better relationships and growth within your own business.

If networking has never been ‘your thing’, perhaps approaching it in a different attitude may help ease your discomfort.  The strategies outlined by Mr. Vest can certainly be employed at your next meeting or event, and you might find you enjoy networking more when your focus turns to others first. 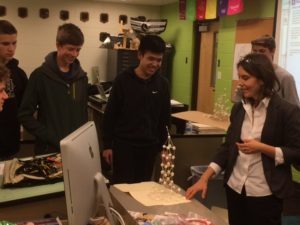 SE Solutions recently helped organize a week long course called “Explore Engineering” at a Michigan High School.  The course gave students an opportunity to get an insight into various disciplines of engineering, including Civil and Structural Engineering.  Several structural engineers gave presentations to the students with an opportunity for “hands on” demonstrations also, including: 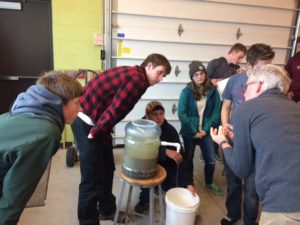 Bob Johnson, PE, President, Structural Solutions Studio, Jenison, MI.  Bob provided further insights into Structural Engineering for the students.  He also was able to include information on the 20 trips he’s made to Rwanda for “20 Liters” to help bring clean drinking water to Rwanda.  Bob was able to bring equipment for the students to build their own bio-sand filters. 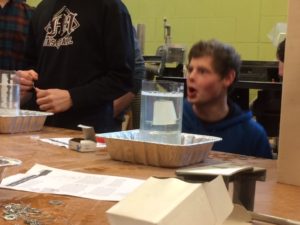 Thank you to AnnMarie, Bob, and Sue for investing their time in helping high school students learn about engineering!

In February 2017, Duane Miller, PE, from the Lincoln Electric Company, presented Welding Myths that Structural Engineers Need to Know About. He nominated The City Mission in Cleveland (https://www.thecitymission.org) for the SEU Speaker Inspires donation of the month.

Duane shared why he chose The City Mission: “An icon in the welding world, Mr. Omer W. Blodgett passed away in January 2017 at the age of 99. In his honor, his family has requested donations be made to the Cleveland City Mission, an organization that has for over a century provided help and hope to Cleveland’s hurting and homeless; in his honor, I’d like this SEU donation to be made. Mr. Blodgett’s was a longtime supporter of not only the Cleveland City Mission, but of similar organizations in other major cities throughout the US. To me, Mr. Blodgett was my mentor. In an unselfish way, he wanted me to “take over his work” and he showed me how to do so. I’ll never replace him—no one will—but he taught me how to continue to do what he did. He was an exceptional engineer, a tremendous teacher and an consistent Christian, leaving a legacy and an example for all of us to model.”

Thank you, Duane, for helping structural engineers with your SE University session, and for your designation of The City Mission in Cleveland as our SEU Speaker Inspires Organization of the Month!

“SEU Speaker Inspires” Organization of the Month: David and Maxine Fowler Endowed Excellence Fund at the University of Texas at Austin 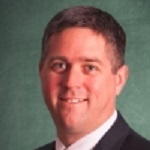 In January 2017, Matthew Rechtien, PE, Esq., a member of the law firm of Bodman PLC, presented A Case Study, and Legal Perspectives, on Engineering Ethics: The Kansas City Hyatt. He nominated the David and Maxine Fowler Endowed Excellence Fund at the University of Texas at Austin(http://endowments.giving.utexas.edu/page/fowler-david-maxine-exc-fnd-caee/4886/) for the SEU Speaker Inspires donation of the month.

Matthew shared why he chose the David and Maxine Fowler Endowed Excellence Fund: “Dr. Fowler, with the support of his wife, Maxine, has been a mentor, advocate, and friend for twenty years. As a professor at the University of Texas for half a century, he has touched the lives of literally hundreds of other engineering students, engineers and others in a similar way. Dr. Fowler is a gentleman and scholar in every sense of those words. I am humbled to be able to contribute, in any way (but especially by, as he did, teaching my fellow engineers), to his legacy, including the David and Maxine Fowler Endowed Excellence Fund.”

Thank you, Matthew, for helping structural engineers with your SE University session, and for your designation of the David and Maxine Fowler Endowed Excellence Fund as our SEU Speaker Inspires Organization of the Month!

Take a look at your desk….  Is it helping or hindering your ability to have the most productive day possible?  Do you waste time searching for those submittals from last week that the contractor is asking about on the phone, as you are frantically searching under shop drawings and through piles of mail?  Basic organization at work is essential to maximum productivity.  At times, even the most Type A person can get a bit disorderly throughout the day, but following these 5 tips can help you get organized and stay organized, so that your productivity can remain top notch throughout the week:

Have you been involved in a project with extensive architecturally-exposed steel connections or complex geometric constraints? Or, have you ever considered using standardized steel castings to improve seismic resistance in braced frame construction? Structural steel castings can be a benefit in all of these situations, but may not be as familiar to most engineers as traditional designs.

In the November 2016 SE University Supplemental Session, Carlos de Oliveira, M.A.Sc.,P.Eng., from Cast Connex Corporation, gave a talk on Structural Applications for Steel Castings. During this lunch and learn presentation, Carlos gave a brief history of the use of steel castings, explained how they are manufactured, and discussed when steel castings can be used to benefit the structural design. Both standardized and custom castings can be useful in solving complex structural geometry and connections, and are typically more aesthetically pleasing for the architect. Some of the structural designs shown in his presentation were truly impressive and may inspire some ingenuity in your next design.

Carlos also provided some resources for using templates for these specifications for custom and standardized steel castings. These templates are a great tool to get started in specifying structural steel castings for your next project that includes complex geometry or architecturally exposed steel. Click on the slide below to view an excerpt from the specs or click visit http://www.arcat.com/arcatcos/cos48/arc48577.html to view example specs and catalogs for various steel casting connections. 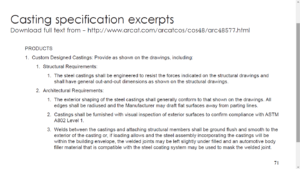 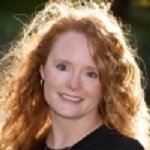 In December 2016, Kimberley Robinson, PE, SE, from SunSteel LLC, gave a talk on Structural Irregularities per the ASCE7-10 Seismic Design Requirements. She chose the Structural Engineers Association of Utah Scholarship Program (http://www.seau.org/) for the SEU Speaker Inspires donation of the month.

Kim shared why she chose the SEAU Scholarship Program: “I think that it is very important to support young and talented would-be engineers and bring them closer to their goal of a college degree and a rich and rewarding career.”

Thank you, Kim, for helping structural engineers with your SE University session, and for your designation of the SEAU Scholarship Program as our SEU Speaker Inspires Organization of the Month! 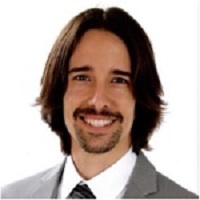 In November 2016, Carlos de Oliveira, M.A.Sc., P.Eng., from Cast Connex Corporation, gave a talk on Structural Applications for Steel Castings. He chose the École Lakay Project in Haiti (http://www.cca-acc.com/cca/ecole-lakay/) for the SEU Speaker Inspires donation of the month.

Carlos chose the École Lakay Project because his company has previously donated to the design and re-construction of this project after the 2010 earthquake destroyed this trade school in Port-au-Prince.  The new facility includes state-of-the-art seismic-resistant High Strength Connectors, made by Cast Connex, which have been fabricated and erected, but the project needs additional funding to complete the non-structural components of the building through Builders without Borders and the Canadian Construction Association.  Besides teaching the students a trade, the school also provides basic necessities and will be able to accommodate 200 students upon completion.

Thank you, Carlos, for helping structural engineers with your SE University session, and for your designation of the École Lakay Project as our SEU Speaker Inspires Organization of the Month!