Most articles I have read on multitasking (trying to do 2 or more things at the same time) say that multitasking reduces your effectiveness. As someone who has tried to multitask, I would have to agree. In addition to becoming less effective, if any of the tasks on which you are working involves interaction with another person, there is the “human” aspect of having that other person feel you are barely paying attention to his or her issue because you are simultaneously trying to work on something else.

I spend quite a bit of time on the phone talking with people and I like to take notes to help me remember the conversation. While it might be more “efficient” for me to take notes on the computer, I don’t, because I do not want the person with whom I’m speaking to think I’m multitasking when they hear the keyboard clicking. Instead, I take handwritten notes and later scan the file into my database.

I will sometimes see on a resume or LinkedIn profile the phrase…”Effective Multitasker.” I think in many cases that portrays the negative image to others that you don’t focus on the particular task at hand. My recommendation would be to NOT put this on your resume or profile. Rather, consider putting something more along the lines of… “able to manage multiple projects effectively.”

For more helpful details on this subject, please see “Exposing the Multitasking Myth: 4 Better Ways to Manage Your Time” from www.TimeManagementNinja.com.

Turn Your Car Into a Mobile Learning Facility

How much time do you spend in your car each year? Why not take advantage of “windshield time” to improve your skills and knowledge? I learned this idea from Zig Ziglar, who was a well known salesperson and sales trainer, and have found it to be very helpful. (I started implementing this back when cassette tapes were the medium used.)

I must admit that there are times when my 2 children wonder why they get subjected to listening to these presentations, but my hope is that at least some of the ideas will take root in them.

There is an abundance of material available for you to learn from depending on your interests, including technical presentations related to structural engineering.

One of my favorites is “The Art of Exceptional Living” by Jim Rohn. I keep this in my car and listen to it several times a year. Here are a few of my favorite thoughts/quotes from Jim…

Please email me suggestions of your favorite learning material. For the first person who emails me their personal learning favorite, I will send you a free copy of either Jim Rohn’s CD, “The Art of Exceptional Living,” or Dale Carnegie’s Book, “How to Win Friends and Influence People.”

In a future article, I will include the suggestions I receive from you.

In the meantime, order something educational for your “windshield time” today, and have a great October!

SE Solutions was pleased to recently present scholarships to two Purdue MSCE-Structures students to help defray the cost of their education. Di Chen and Harsh Nisar were the recipients of the award. This is the third year that SE Solutions has offered the scholarships. 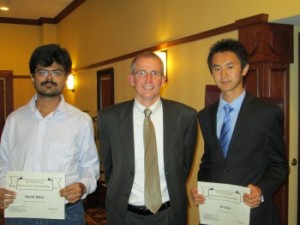 Di and Harsh anticipate graduating this December and are excited to start their careers in structural engineering.

Di Chen received his BSCE from Tongji University in China, and he will be finishing his MSCE this December (2014). He is interested in finding a position in structural engineering and is open to moving anywhere in the US. Di is an international student and would require work sponsorship at some point in the future (after his initial “OPT”).

Just before Di started college, the Wenchuan Earthquake (also called Sichuan Earthquake) hit China in May 2008 causing immense damage and claiming approximately 90,000 lives while injuring over 300,000. This earthquake hit about 75 miles from Di’s home. Luckily, no one from his family was hurt, but this event was why Di chose to become a structural engineer, and he was involved in the recovery events after the earthquake. Di has a perfect 4.0 GPA in the MS Program at Purdue.

For additional background on Di, please see his Linkedin profile at www.linkedin.com/pub/di-chen/91/2a9/a74 .

Harsh Nisar received his BSCE from the Indian Institute of Technology at Bombay. He is doing a master’s thesis related to developing an axisymmetric finite element for cylindrical tanks with thermal loads. Harsh will be finishing his coursework in December and hopes to have his thesis finished shortly afterwards. He would like to find a structural engineering position anywhere in the US and his passion is Solid Mechanics. Here is what Harsh had to say about Solid Mechanics…

“Solid Mechanics drew me towards structural engineering. As a high school student I was fascinated by the simplicity and universality of the principles of classical mechanics. This has only grown as I’ve gained more insight into solid mechanics, especially with respect to structural behavior. As a structural engineer one works in special cases of a far more general framework of solid mechanics. This generality remains spellbinding. The challenge is in isolating favorable behavior for a system through analysis and enforcing conditions, through design, to ensure favorable outcome.”

Harsh is an international student and would require work sponsorship at some point in the future (after his initial “OPT”). Harsh also has a perfect 4.0 GPA in the MS Program at Purdue.

For additional background on Harsh, please see his Linkedin profile at www.linkedin.com/in/harshnisar.

Technology exists today that is helping improve the process of shop drawing review. Engineers who utilize the Model Review technology are finding they are improving the quality of their review, in addition to saving time and having more fun. Once implemented, most engineers comment how they would not want to go back to the former processes.

This new process is also increasing the level of collaboration between engineers and fabricators/detailers. It is important to reiterate that technology such as this is simply a tool that facilitates a better way of working, but at the core of this must be the desire from both sides to increase collaboration.

The feedback from engineers who have implemented these new workflows has been very positive. Erleen Hatfield, P.E. and Partner at Buro Happold in New York, had this to say about her experience in utilizing this new technology: “When fabricators are willing to send us models as the shop drawings instead of the traditional 2D paper drawings (we call these ‘shop models’ since ‘shop drawings’ doesn’t really fit anymore) we know the review process is going to go much smoother and significantly faster.”

If you would be interested in learning more about how this technology could help your firm, please visit our Model Review Resources page. You can also contact Brian Quinn, P.E., at 616-546-9420 or by email at Brian.Quinn@LearnWithSEU.com.

Opportunity to Help People in the Philippines

Would you like to use your background to help people in the Philippines?

Build Change (www.buildchange.org) is an international non-profit social enterprise that designs earthquake-resistant houses in developing countries and trains builders, homeowners, engineers and government officials to build them. Build Change’s designs are affordable, culturally appropriate, and use materials and techniques that will continue to be used after our intervention is finished. Build Change has ongoing post-earthquake housing reconstruction programs in West Sumatra, Indonesia and Sichuan, China. So far, Build Change has improved the design and/or construction of over 20,000 houses worldwide.

“If You Want to Change the World…”

I recently saw a great video from a blog post by Craig Jarrow at TimeManagementNinja.com.

Just Say “NO” to Increase Productivity

I recently received an email from Anthony Fasano (Institute for Engineering Career Development) that had a link to Darren Hardy’s presentation titled “Productivity Strategies of Superachievers.” This is an incredible presentation and I highly recommend you carve out 90 minutes to watch it asap. There is no cost and I’m confident you will get immediate benefits. Click below to watch the YouTube presentation and enjoy a more productive and fulfilling life!

During the April 2013 SE University session, Otto Schwarz from Ryan Biggs Associates, PC discussed how engineers can manage the process of special inspections for their projects. One of the key items discussed was the type of paperwork that is required, and how to create the necessary documents.

While there may be modifications needed to these forms to bring them up to date for the latest codes, they provide a good starting point for creating a library of special inspections documents that can be used by your firm.

We hope you find this information helpful. If you have other sources you have used to create special inspection documents, please let us know in the comments.

Have you ever sent out an email, then realized a word is missing in the subject line? Have you written a report, and realized after the report was sent that words were misplaced or used incorrectly? Could these errors have been caught with better proofreading procedures?

During the October 2013 SE University continuing education session “Improving Your Writing as a Structural Engineer”, Janel Miller presented information on the process of proofreading. She explained that while one function of proofreading is to catch spelling mistakes, it is also critical to address issues such as missing or extra words, inconsistent formatting, and incorrect labeling of tables or graphics.

In this two minute, 40 second clip, Janel suggests steps that you can use when proofreading documents, and outlines four key areas to review to ensure the documents you present are error free.

As a continuation of my discussion last month on Dale Carnegie’s famed “How to Win Friends and Influence People” book, I wanted to focus this month on the chapter titled “You Can’t Win an Argument.” In this chapter Dale notes that “nine times out of ten, an argument ends with each of the contestants more firmly convinced than ever that he is absolutely right.” Therefore, you can’t really “win” an argument because if you are correct you lose and if you are not correct, you lose.

Here are some suggestions from Dale’s book that come from an article in “Bits and Pieces” about how to keep a disagreement from becoming an argument: